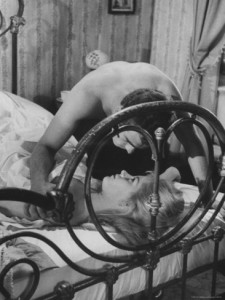 Daniel Adler is on the verge of a new epoch and is subconsciously preparing himself for it. His actions give in to extremeness and he does not set out to conquer; he is waiting, planning, working to make slow advances. And then when the time is right he will move quickly and the pace of life will rapidly accelerate.

I love flying dreams. I have them fairly often. Last night I dreamed I was in a one man fighter plane, circling low over coastal waters. But there were dinosaurs or invaders or something shooting us down and suddenly my view switched from the third person to the first and I was circling closer to the water, afraid that I would plummet and crash, but I slowly circled down, down to the ground.

Cat and I were talking about the maternal and paternal relationship. In the case of sons and lovers, mothers are often jealous of their son’s women because they measure themselves up to them. In a way, it’s like they’re thinking about whether or not their sons would have wanted to have sex with them when they were young. And fathers do the same with their daughters: would I want to have sex with her? And if subconsciously they do, that’s all well and good. If they don’t they’ll say lose some weight.