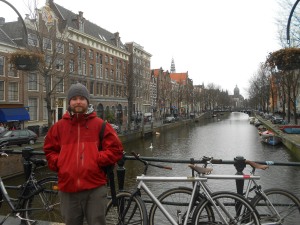 Over the past two months I’ve visited seven countries, some more and some less civilized. The Netherlands is the most civilized I’ve seen yet. “Civilized?” Don’t worry, this isn’t about postcolonialism. I mean walking down the streets without feeling anxious; libraries and punctual public transportation; and no feral animals. According to these criteria, Holland is very civilized, and very expensive. The more expensive a place, the higher the quality of life. The happier they are. That’s civilized.

It’s alarming to pay 8 euro for a “chip card” to use the subway, before you can put a minimum of 10 euro on it. But the subway charges by the kilometer, practically, and comes frequently. Moreover, you can switch at some metro stations to the national rail, which is always right on time. Yesterday I went to Amsterdam this way. Typically a round-trip ticket is 25 euro. Not cheap, for an hour train ride. But civilized countries also offer opportunities and rewards for those willing to research and learn, to work with the system. Chantal told me that since this is National Book Week, you travel for free on Sunday if you buy a Dutch book. Every year one literary author’s book is rewarded after you buy another Dutch language book. The system rewards reading and traveling.

Amsterdam was the richest city in the world 400 years ago. Long tolerant of other religions, Amsterdam attracted people from all over the world. Jews especially flocked to the city. Thus the first stock exchange. But ostentation was frowned upon. You were taxed according to the width of your home. The narrowest homes are barely wide enough to fit a loveseat. Seriously, the staircases are so narrow they move furniture through the front windows, and most buildings have a large hook on their gable, for a pulley. Today they use mechanized crane barrows to move, which we saw in action.

Amsterdam of all places I was expecting to be pretty uncivilized. Weed smoke billowing, hookers in windows, you know. But everywhere were beautiful canals. They call it the Venice of the North, sure, it’s clear why Peter the Great modeled his city on it three hundred years ago. Four hundred year old gables tilt sideways, and some buildings slant almost a foot from their neighbors. Because in order to build the foundations, the Dutch had to drill long wooden beams into the bog. Some beams were only two meters long, so naturally, after four hundred years, they’ve moved, still intact.

There are Dutch people, but Amsterdam is full of tourists looking to get messed up and have a shag. The Dutch look the other way. Chantal explained to me that here morality is separate from politics. It’s a step further from separation of church and state. And in the Netherlands, with a population of less than 20 million, it’s easier to actualize. Factor in one of the more liberal histories in the world, and it’s easy to see why dope and hookers are legal. It’s easier to have it in the open and manage it than it is to keep it underground. Why not in the U.S.? Because our country has ten times their population. It becomes much harder to manage on such a scale, which is why only on the state level do such proposals work. Most Dutch don’t smoke pot or go to the red light district, turning up their noses at it. But just because they don’t agree with it, doesn’t mean it won’t continue.

When I saw the desperation and mild shame in the hooker’s faces I understood that not everyone in this country is happy, despite their high standard of living. But that’s a result of their choice, perhaps not doing things the Dutch way. Very proud people, the Dutch. I mean, Amsterdam was once the center of the world, in the early 1600s. Which is also when some of the world’s best art was painted.

The Rijksmuseum has the best of the best, but it was 14 euro to enter. London‘s museums are free. But when I admired Rembrandt’s “Jewish Bride,” and “The Night Watch,” Rembrandt’s largest and most ambitious painting, I didn’t care. Besides, at seven was a free performance of Bach’s St. Matthew’s Passion in Westerkerk, a four hundred year old church in the not-for-tourists Jordaan district.

And hearing the tenor’s voice echo in the high nave, sitting in the old pews, and watching the period pieces played with such passion and accuracy, it was all worth it. When I was little, my dad used to take us to concerts in Portland’s Trinity Cathedral, where we’d pay $80 to see Handel’s “Messiah” or “St. Matthew’s Passion.” It was then I realized that even though this country is significantly more expensive than Italy or Greece, it all comes out in the wash–you pay for a refined happiness, and a bit more civility.