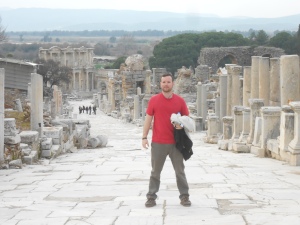 It wasn’t a short day, I thought, as I ran bread in hand to catch the 720 train, unworried, but hurried. My belly was full from the meatballs with yogurt and rice and salad, and the Coke, which was bubbly and sweet, full of caffeine, and which caused the expression on my face I make after shooting espresso that Anthony admired as I sipped with great satisfaction, since it was so very needed after our three kilometer walk down from Ephesus. “Buy me a ticket!” I yelled to Anthony as he broke into a sprint and I led up the rear, gnawing at my crust. I took it as I walked out the restaurant, still chewing my last bite. I really had to hurry to eat the last of the salad and now on this run to the station, not only was I beginning to sweat and were my feet beginning to hurt but I was getting, in the words of mummy dearest (I’ve been hanging out with Holly the Aussie too much), the gollywobbbles, or agita.

Holly was twenty feet ahead of me and when I yelled that out she stopped and turned and we started fat kid jogging together. Good ol’ Holly. I took a lot of photos of her walking through the ancient city. I couldn’t believe it was so expansive. I mean, Ephesus was the capital of Asia Minor in Roman times; they used to have the second or third largest library in the ancient world, running water, toilets. And then after earthquakes and some Gaulish raids it got New Orleansed. All that was left were the ruins we had just walked through, marble streets, the stadium and colannades. Uncle Jacques and Aunt Mel were right. Totally worth seeing.

And by the time we had managed to get back to town and eaten we had just eight minutes to catch the train. And it was a ten minute walk. So we ran through plazas, past fountains, up streets, and past old Turkish men smoking. When we arrived at the station, Anthony was at the window buying our tickets. And the train-man was dawdling. “The train is in sight!” Holly shouted. There were crowds of people on the platform. And this goober was still printing our tickets. I wasn’t worried though; I was too full and tired to be worried.

And so as some got off the train and the crowds got on, we realized we’d have to stand for the hour train ride. After we had woken at five, flown to Izmir, walked around, taken the train, gotten lost, walked to the all-too-disappointing-former-Ancient-Wonder-of-the-World Temple of Artemis, walked back to town, taken an overpriced cab to the ruins, walked through the ruins, missed the minibus, walked the 3k back to town, eaten dinner, and run to the train station, we had to stand on the hour-long train ride home. No biggie. After everything else I’d been through today, this was just the cherry on top.