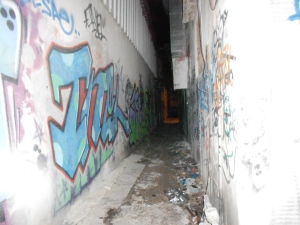 I dreamed about being on a Birthright-style tour around the world, on the rest of my trip, in Egypt, India, and woke to see Max already leaving for brunch with his cousin. I elected to stay here since Yoni and Lisa were out. It was nearly one. I made one of the instant coffees I had taken from last week’s hostels and was surprised that it was bigger than the others. Turns out it was a Turkish and I wound up spooning the strong grainless coffee into my mouth as I ate my muesli and  read my e-mails. Halfway through the grains had settled to the bottom and I sat, wired.

Yoni soon came home. He had gotten a filling, his first, and he was hungry after watching his friends eat and not having anything all day. So I did forty pushups, showered and we left for a meal.

It was sunny and beautiful, with street dealers selling knitted hats and other tchotchkes, and we spoke about where to eat. Yoni suggested a place called Benedict, but it was 60-70 shekels per person, a little out of my price range, especially if I was going to take him out, which I was resolved to do since I have been sleeping on his mirpasset for the past week. He admitted it was overpriced and we decided on Nechama Vachetsy instead.

I hadn’t been to this area of town before. Yoni ran into a couple of men who asked him, “Who is your bearded friend?” While we waited outside in the sun I made sustained eye contact with a pretty girl it took me about five seconds to put a situation to, so that by the time she stopped her boyfriend and we were shaking hands, I remembered that she was from Chile and I had met them, what was it, Monday?

We sat next to a glass door that was pulled back to allow the waiters and cigarette smoke entry from the porch into the non-smoking section. I ordered an open faced meatball and eggplant sandwich because they were out of the Mediterranean sloppy-Joe. Our handsome blue-eyed, bad-English-speaking waiter came back after I had already ordered it and told me that they were out. He was wearing a black shirt with the collar cut boat-style, with a graphic penis and hairy balls on the front, deciding between different colored condom suits from a wardrobe –“Cualquier llevar hoy?” it read. An old man next to me spread mayonnaise on his egg sandwich. His wife was eating spaghetti and meatballs. There were young attractive people seated everywhere else and no one was in a rush, especially not I. The old man turned around so I could see his flat cucurbitaceous nose and his bleary blue eyes behind his glasses, his red little mouth agape. I wondered when he moved to Israel. I thought of Hemingway and Miller, how they would spend their last franc on the things they loved, the experiences they needed in order to enjoy life and live, and I imagined them eating in the same sort of Parisian cafes, seventy, ninety years ago.

My sandwich was open-faced and meaty and the eggplant was dusted with cheese. It came with an arugula salad with fresh cucumber, radishes and sweet little tomatoes. There was also a plate of bread and jam. We talked about the many different Israeli political parties, our respective health systems, Yoni’s family and other large-scale differences between the U.S. and Israel. He had ordrered merguez sausages and eggs and two cups of fresh squeezed orange juice. Near the end of my meal he asked me if I wasn’t going to drink my orange juice, since he had replaced a cup of coffee with an extra. It was so fresh, the orange pulp had gathered to the top and I had to use a toothpick to mix it with the opaque water at the bottom. It was so sweet it made my cheeks flush.

When we left it was nearly five. We walked down Rothschild, a dual-sidewalked pedestrian road with trees, statuary, a coy pond and grass lawns running down the middle, admiring the skateboards, kisses, dogs, breasts, beach cruisers, hair styles, prams, and necklaces. Across the street was the waitress from the other day, the one who smelled like raw earth and fresh lavender, who I had to tell, “You smell so good,” who laughed and responded, “I’m here every day.” I walked with my hoodie unzipped and watched long legs in red shorts. It was one of the rainiest Januarys in Israel’s sixty-four year history. On the street was an excitement in this hint of spring and in knowing that winter’s worst is over, and better days are ahead. Each block showed a different style of building–five-story Bauhaus with semi-circular porches and huge-branched trees with bark like elephant skin in the street; a former Russian embassy, stately and modern with small windows and sentinel palms; Yoni’s bank’s skyscraper towering over fast-growing eucalyptus.

There had been a street party, and workers were already cleaning up broken green glass and shredded paper. On both sides of the street people who lived in overlooking apartments stood on their porches drinking and smoking. Bars were full; clubs pounded with bass; drunks stumbled, their arms slung over their friends or caring strangers. I wasn’t sure where we were going– we were even farther away from the apartment. Earlier in the day Yoni had said he needed to write a paper; was I impeding on his study time? would we take a bus home? We were already about a half hour walk away. My intermittent worry about the future was distracted by the sun setting off a resplendent orange-red sunset over the Mediterranean. We walked deeper, down past the end of Rothschild, past the mangy feral cats with dirty noses, turning sideways to squeeze between a garbage bin and a parked car, past where we were last night, into the Neve Tzedek neighborhood. Yoni said, “You don’t even need me to tell you that we’re in a different kind of neighborhood.” I looked up in awe at the red-flowering bushes, around me at the wine bars, the posh little restaurants, and the newly renovated two and three story buildings.

We walked into the empty courtyard of the Suzanne Dellal Center for Dance and Theater, which Yoni pointed out was surrounded by apartments. The sky was a royal blue ahead of us and a lighter blue dappled with whitish clouds behind, over the sea. And as we walked into the entrance of the dance theater, with Yoni next to me, I felt much older, taller, wiser. I felt like I had seen so many fancy foyers with nice seating and cafe counters and varnished wood, I felt like I had seen it all so many times before that at this point it was only another scene in the film of my life. I was an old man. I told Yoni, “As we walked into that foyer I felt sixty years old.” And as we walked into the following courtyard where the Hagana used to train, I looked up at the sky and re-imagined that bizarre feeling of having aged. That Mediterranean Winter Sky, the one the most crazed baroque painters sought in the distant Levant, more oriental and diaphanous than their vibrant Parisian or Rouenese light, more mild, not as sublime, but perhaps more beautiful. Was it a piece of the collective unconscious triggered by a familiar scene? The Mediterranean sky was so blue, so old, hundreds of millions of years old, that I felt myself only a speck, only trying to do what I best could in my shallow remnant of time, and the overwhelming beauty of the scene was so powerful that I nearly cried — I held my hand to my eyes and wished I could cry.

We sang “American Pie” and walked the promenade along the beach, talking, walking and talking. A man rode wheelies on his bicycle, small bats fluttered, a little boat paralleled us in the sea. Lovers walked arm in arm, mother and son held each other, the sky blackened. We walked so that I wished our time wouldn’t end. We walked until I wished we could stop. I thought about first feeling trepidation at walking in the opposite direction from the apartment. Now having walked three times the distance I felt tired and healthy, robust and European, knowing that we would circle to the apartment easily, that in the U.S. we would have hired a cab, hopped in a car or just turned around sooner.

We talked about our grandfathers, gay Tel Aviv, and why certain parts of the beach weren’t posh anymore, why clubs had fallen off and how private investors made certain areas difficult to renovate. We walked past David Ben-Gurion’s house, and Yoni said that the entire street has wi-fi. I added, “Most of this country does. Not even New York has free wi-fi like this.” We went to a grocery store, noted the stray dogs and bought Lisa chocolate. Close to home my legs ached and I wanted to take off my shoes and sit on the couch. When I walked up the three flights, drank some water, and plopped on the couch it was nearly seven. What a day, I sighed, and looked at the ceiling.