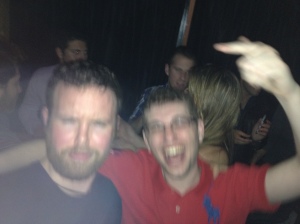 The Israeli weekend begins on Friday, Shabbat. But it’s a religious weekly holiday–everything’s closes at sundown. Of course, there are bars open; Tel Aviv likes to model itself after New York. But it’s oddly quiet. Many people go out on Saturday, the day before most people begin their work week. That the Jewish culture doesn’t really provide for a weekly day to go out, get wasted, and sleep in till noon the next day is perhaps why Jews have a reputation for being intelligent. Then again it could also be the natural intelligence of Israelis. The party nights are Thursday, Friday (for non-religious Jews) and Saturday.

On Friday night we went out for Lisa’s birthday to a bar in north Tel Aviv. The “outside,” which was covered and for smokers, also had a bar, but Lisa and her friends were upstairs in the back. The DJ was spinning hard, singing along, in a hard-t0-reach corner of the bar. I had my eyes open and met a young woman who wore a floral shirt, which looked antique. “I like your shirt. It’s very 19th century.” “What?” “Your shirt,” I yelled, “It is old-fashioned.” “Yes, it is Romantic.” “Yes.”

Elad, one of the Israeli from our Birthright trip, came to meet us. We decided that there were too many men in the bar so we ran through the rain to another club. But it was fifteen dollars to get in and when Elad asked the kids in line if it was fun they didn’t answer. We walked into another bar that was nothing special and I said, “Let’s go back to the first bar. At least we know some of the girls there.” So we walked back in the pouring down rain, excited now that I had perspective and another chance to talk with the floral shirt girl.

I saw her again when I was “outside” smoking with Max. I said, “Your Romantic shirt reminds me of Romantic poetry. Do you know Keats?” She knew the name. PullING up a seat next to me with a shot of whiskey and a glass of wine (since I’m Irish, it was kind of a turn on). Her hair was up, her lips were red and her eyes were blue. She seemed to be of Russian descent. Her name was Idit. Tricky, but after I asked her how to spell it, I wasn’t going to forget. I complimented her on her English, said her neck was long, and that her mouth was fine. She hadn’t heard any of that before, was used to her eyes (which sparkled) being complimented, but not her jawline. She asked if I knew any Hebrew, and I said, “Only Boker Tov” (good morning). “That’s good,” she said, “so you can say it to the girls in the morning–” I leaned forward and whispered, smelling the curly wisps of hair behind her ear, “Boker Tov.” That was  what started me thinking about all the possibilities, which was probably my downfall.

Max came over with Elad. They were leaving without saying anything else. A good wing man. I worried for about fifteen seconds about losing a free ride home, but felt better when I looked at her and felt her calm. We started talking about politics. She wanted to and was interested in it, so I began to explain the electoral college and Congress, which took a while, since I kept confusing her with “Congress” and “Senate.” Things were going well. So well that when she said “I have to go to the bathroom,” and I said, “Me too,” she said, “We really are on the same page.” Downstairs in the bathroom foyer was the perfect place to make a move. But when I said, “Idit,” and touched her face, she turned away. I shrugged.

I pretended like nothing happened. Her friend and roommate was a bartender, and had issues with her parents, who were staying with her, and were locked in their apartment. Idit stood, smoking, and I felt unsure now that there were just a handful of people left. We walked to join a group of people on the couches, a few Danes, a “musician” from New York and some natives. I sat next to a leggy blonde, hoping to make Idit jealous, and she sat next to a dark-haired, blue-eyed Dane, ostensibly doing the same. After I told the blonde, Amanda, about what I’m writing, she apologized for not knowing me if I was famous (hopefully one day this will be the case). Then she spieled about why she works for the Embassy, and how she wants to travel the world to better inform people who haven’t been so lucky. We decided to break up the party. I could taste the staleness of my breath and wondered how late it was.

We all gathered and walked out. It was that time of night, after the storm. I walked with Idit around puddles and dropping roofs a few paces before she asked where I was going. “Spinoza.” She said I was going the wrong way. With that, I said goodbye, and she looked surprised when I walked away from her without kissing her cheek and hugging her. I should have gotten her number but since I don’t have a phone, my only option was Facebook. I walked down Dizengoff, running at times to try to get home faster, to be less lonely. I worried that I wouldn’t get to sleep in and that I would be locked out without a key and that Max would wake me early to work on our project. But then I saw that it was only four. Before I knew it, I was back. It was only a twenty minute walk.

Tel Aviv isn’t New York. If I want to party, I’ll go back to Bushwick. But the women here are all so pretty, there’s at least one feature that’s attractive enough to inspire conversation — any day of the week.

Idit, if you’re reading this, I look forward to seeing you again.

Daniel Adler writes fiction and nonfiction and is finishing his MFA at University of South Carolina. View more posts