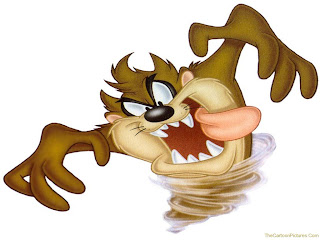 Sometimes in an attempt to express myself I invent neologisms like “hurricanal,” meaning to feel like being trapped in a whirlwind. But as a colleague has pointed out, you can’t get away with just adding the suffix “al” der. Latin to any noun to make it an adjective. What would you say then I asked.

Of course! Because the Tasmanian Devil is so engrained into our cultural unconscious that we all know he arrives a flurry of dust from his rapid spinning.

But. What happens if I write this phrase in a certain post postmodern work of fiction, which I believe will be more closely aligned with classical styles of writing and postmodern styles of narrative than a continuation of postmodern stylization, then what will people who read it in two hundred years think? Will the image of Taz resonate as loudly with them? Or will they view it as an arcane 21st century allusion? And we all know Daniel Adler, the unpretentious does not want to seem arcane nor esoteric.

So I will continue to use my poetic license however I deem necessary, and if an allusion to popular culture strikes me, you can bet your tootsie that people in a couple of hundred years will be able to identify. What do you think?