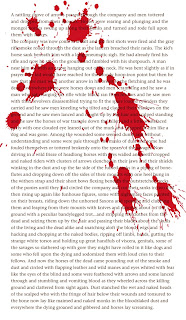 For thousands of years young men entered battle as a rite of passage. Those who lived had tempted fate and prevailed. Those who died didn’t want it badly enough.

But after WWII, in Vietnam for example, modern society made war out to be background noise, unwanted, (gasp!) dishonorable. And so today we don’t have wars, at least the way we used to. That’s why so many soldiers return with post-traumatic stress disorder – their experience is out of place with our world of Whole Foods and text messages. And this is to be lamented. In a way.

How I wish I could go to war, to fight for my country and myself and prevail and be honored. Alas, war has changed so that it is rarely face to face combat, and the horror of watching your best friend’s leg blown off by a nameless opponent is not the same as striking down a man who attempts to kill you with a lance.

The best thing about war is that it makes you happy to be alive; it allows you to further enjoy peace. And when peace is constant, or at least relatively so, in post postmodernism, many become malcontent.

Which is why I say to myself, even on rainy days, in the language of a quondam enemy: Ich bin glücklich.