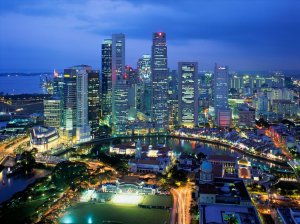 Singapore is a lot how I expected it to be. Big buildings, clean, new, safe, quiet, all very nice. Some say that Singapore doesn’t have any character, but I think its niceness and lack of grit is its character. It’s the ideal modern city, a lot like Brussels in its global importance, and just as nice a place to raise a family.

I’d heard about how expensive it is, but when I was looking for a money changer on Bugis St., I found a juice stall with watermelon juice for a dollar, a Singapore dollar, which trades at what the American dollar does to the Euro, or 66 cents. The subway ride to Ivan’s was $3, but the card I used is refundable for a dollar. For a half hour ride, that’s not bad.

The flora is nicer here than in Malaysia– no swampy palms, just tall linden-like cousins and tropical trees whose fan-shaped fronds shutter and blow in the equatorial breeze. Even the housing projects, which are required to have something like 30% Malaysians, are far nicer than American projects. They’re the most expensive in the world. Their gardens are immaculate. On the elevators there’s no fear or animosity between residents. Maybe it’s due to the fact that Singapore offers no welfare.

Everyone is pretty attractive. It’s as though the smartest, best-looking Chinese made it to Singapore because everywhere I go, I see short skirts and beautiful legs and big round eyes and soft white shoulders. Maybe it’s the Western fashions, but from what I’ve seen the women here vie with Moscow and New York for best-looking in the world.

It’s funny though, that 30 years ago Singapore was just another labor outsourcing post. Then it became one of the leading Asian Tigers. Inside “The Shoppes at Marina Bay Sands,” above brand names associated with big money, are old photos of pre-War Singapore: a ring of waterfront houses. The entire skyline is less than thirty years old, which makes New York’s skyline look fusty. Today cheap labor comes from countries such as Vietnam and Cambodia, where prices still are nowhere close to Western. Morgan reckons that in another generation outsourcing will move to Africa. Isn’t it interesting how the lives of cities can coincide with the rise of a generation? Maybe by the time my kids are traveling around the world they’ll be surveying Luanda and Lagos.

It comes at a cost, however. Indians are pariahs. It’s common to see on housing or job applications “No Indians or Malaysians.” While Tamil, Malysian, English and Chinese are Singapore’s official languages, the Chinese run shit here, accounting for 70% of the population. They hire Filipino maids and pay them the world’s lowest wages. And the government doesn’t like to talk about it– there’s no minimum wage because that would “lower competitiveness.” Meanwhile Singaporean employees work incredibly long days and are some of the unhappiest in the world.

As we walked out of the floating Louis Vuitton island store, and back onto the Harbor, we started talking about Singapore’s lack of character. The city was quiet for Friday night; there were only a couple of locals sitting in Raffles Place, the fourth most important financial center in the world. Morgan said that much like Hong Kong, you can spend the whole day traversing the city along skybridges. If you’re seen eating on the subway, fellow Singaporeans will call the police on you for a $1000 fine. And talk about safe, Singaporeans are deathly afraid of terrorism– they have the 2nd highest execution rate in the world, and send out annual full-color emergency handbooks. It may be judgmental, racist and narrow-minded, but in a country of little more than 5 million, those features are exactly why Singapore is one of the world’s safest and wealthiest cities.

Ivan and Morgan lamented how Sinagpore isn’t really a good city for students, but perhaps that’s part of its charm. On Clarke Quay twenty-somethings sat on the bridge drinking peacefully. In New York at the South Street Seaport, there’s yelling and drunkenness and always a sense that at any moment the whole party could erupt into chaos. That relaxing feeling in Singapore is its character. It may not be the most exciting city in the world or have the most original culture; it may give off a sense of artificiality; and at any point you may imagine you’re in any other city in the world, but Singapore is nice. It’s a nice place to live. And for a few days, it’s a pretty nice place to visit too.