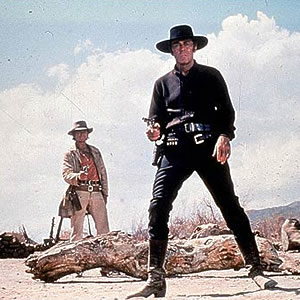 I wandered over to the internet cafe’s book rack and found a strange little book called This is the West. It was yellowed and in poor condition, the edges of its pages red. I wondered how it was intact– the binding was gone. I opened it and realized it’s a collection of essays, beautiful little stories on the American West, moving through its history as prehistoric swamp and dinosaur playground into the moment when Tecumseh sent a letter to the Great White Father saying that this is our land, to the Uranium rush in the West today (it was published in ’57).

Shira asked me why we call Native Americans Indians. I told him that Columbus thought he had discovered India when he discovered the New World. And when I read the quick synopsis on the first page of this book with the word Indians underlined in pen, I figured maybe that was why this book had lasted so long on that bookshelf. When I asked to borrow it from the owner of the cafe, he said make sure to bring it back, as though he were lending me a fine pen. From the feel of this book, it hasn’t been read in decades. It smells like the library in the middle of summer when I was eight, when I’d get stacks of books after scouring shelves in tepid evening sun, before a party on the front lawn with children, parents and older folk celebrating another summer, thick growing grass, and the smell of sun-baked chlorine on bodies mingling with that of charcoal and smoking beef. At the end of this book, past the 150 places to see in the West, are old nostalgic recipes with names like Dude Ranch Pork Chops, Apache Sunset, Pemmican Pate, and Ramon Adams’ Own Beans.

I read these titles and their ingredients and felt a wave of nostalgia rising in my eyes as I imagined  fresh-cheeked mothers dressed in blue gingham and white frocks eager to please hard-working husbands and hungry Johnnies and Sallies with a new Western delicacy. All optimistic, all happy because after winning a war and settling a continent nothing could possibly go wrong, nothing except the passing of youth and the disappointment of a life left as unfulfilled and untraversed as the great continent still standing over us.

The West runs from Texas in the South to Montana in the North, from Missouri in the East to Oregon in the West. It was the playground for Kid Curry and Butch Cassidy and with so much land to cover it wasn’t unheard of to move four hundred miles to rustle a train. Today, the American West is the stuff of legend. It didn’t pass so long ago, but all the people who knew it are long dead. Little girls who saw Custer ride past on his way to Little Big Horn died seventy years ago.

This book is great, I realized. And how fateful, that while sitting here, and thinking about how the one topic I can most easily wax prolix on is the West, I should find a book dedicated to exactly that.  There’s all kinds of good information in here, like the cowboy’s routine. Cowboys used to stop working at nine, then everyone except boss, wrangler and cook would stand watch for two hours. Roll out at 330. Some men would rub tobacco juice in their eyes to keep them open. Most would sleep on a Tuscon-bed: lying on your stomach and covering that with your back. Then cover your head with your saddle and saddle blanket to protect you from any hailstones bigger than hen-eggs. And of course, there’s a chapter dedicated to the five pillars of the cowboy’s diet: coffee, meat, beans, sourdough, stew. Like in most rought-and-tumble lifestyles, the cook is very important because he provides what little order must exist, that of meals. Cookie would make the coffee with one pound of coffee, wet it good, boil it for thirty minutes, pitch in a horseshoe, and if it sinks add more coffee. Before serving he’d add a pinch of salt and a dash of cold water to settle the grounds. Hell, just reading all this made me yearn to get back to my continent and drink that good old American coffee. Or enjoying maybe the best part about America: standing at the edge of a wood and imagining you’re breathing air that’s never been breathed before, standing on grass that’s never been stood on before. Standing in front of a lake so clean and fresh, why, if you had a cut on your finger it would just as soon heal right over. All this fresh in my mind, sharp and clear, thanks to images from Hollywood, vibrant American prose in this book and others, and my own personal experience.

But let’s face it, most of mental our images of the West are not from our own experience. In White City, New Mexico you can practically see the Apaches crawling over hillsides, blue smoke rising from rifle fire, despite the Apaches being long gone. This is a phenomenon somewhat unique to our time, reinforced through the mechanization and reproduction of the image. The power films have over our imagination is much stronger than that of literature– because there’s nothing to dispute; there’s no room for interpretation. When you see John Wayne strolling into a log cabin in the middle of Texas, that’s the image you have of a cowboy in a log cabin in Texas. Films construct a modern Platonic ideal. They help to mythologize and standardize stories and images. It’s the same way we all think we’ve read The Adventures of Huck Finn— we’ve seen so many movies, heard the story retold so many times; of course we’ve read it. But I bet you don’t remember in what state Tom meets Huck.

These stories are part of our national unconscious. They affect us in ways we don’t even realize. Take WWII for example, the latest American history to become myth. Soon no one from the war will be alive, and by the time I’m an old man, even the young people who heard the stories firsthand will be dead too. And that places such a moment in history into a sector of the imagination which will never be forgotten, and will only be enhanced and written about and exaggerated until eventually even Hollywood will run out of things to do with it. It will become engrained in the American consciousness as part of us. The War? When we fought those Nazi bastards and the Japs tried to fight us in the Pacific? Hell, of course we won. Because it was a fight of good against evil, and good always prevails. In the same way, the American West was conquered by laws and suburbs, and while there exists in our consciousness the desire for adventure and rambunctious outlaw living, it finds an outlet in our history, in the way we mythologize and remember who we are. Both parts of us exist– the good and the bad– but through our stories the good always wins.

These are our national stories, stories we tell foreigners in order to help them understand why we’re proud and loud and don’t give a damn about anything but what we want– because that’s what the West was about– that’s what Europeans can’t understand, because they never had a surplus of space. From Carthage to Manchester you can see their plots of land divided into little rectangles, but from Astoria to St. Louis, this land is your land, this land is my land. Sure we moved the Indians out West but look at all the land we gave back to them. President Grant’s peace with the Indians gave Cochise, a dangerous Apache, a reservation, and in the North, Crazy Horse left Custer’s Last Stand before dying a few months later of a fatal wound. That was the beginning of the reservation Indian.

The similarity between the West and the War is that these are the last greatest eras we can mythologize. Not quite enough time has passed for us to take the ’60s in the same way, although you can bet that in twenty years, it will have started (although the ’60s being less heroic has something to do with it). By 2020 there will only be a handful of WWII soldiers left, and they will give their stories to ardent listeners who want to preserve the anecdotes with grains of truth and color them with their own romantic memories, longings and jealousies of the storyteller’s courage, and secret sympathies that they themselves hadn’t been born in a more heroic age. Then the War will bleed into our consciousness and we will come to understand it as part of us, and then onwards we will look into history to see what mattered most next.

But the West is different because it’s not only an era, it exists in space. You can still go to the West and see it. Without the honkytonks and the Colts, maybe, but with the lariats and the saloons. Unlike a battlefield of ghosts, the West is not limited to a grassy meadow or a spot on a river. It is the river, it is an expanse of meadows, it is all and every geographical feature from here until there. Perhaps that is why it is so important in understanding the American consciousness– because it has not ended the way a War does; its beginnings can be traced but not limited to; its effects are still felt and they are still affecting.

When I think of the West, I’m taken away from where I am. I am simultaneously a sodbuster surveying the sky and coming winter, an outlaw driving forty head of stolen cattle and a 21 year old driving through the Black Hills for the first time expecting the ocean to rise up any minute but knowing that there is still another 1500 miles to go… All that rolls through my consciousness and when I look up at the cows grazing, I remember that I’m actually seven thousand miles away from my west, in India.

Two nights ago, before I found this book, I woke and couldn’t go back to sleep. I had a song stuck in my head. It was Willie Nelson’s “My Heroes Have Always Been Cowboys.” I extricated myself from my sleeping bag, filled up a bowl of cereal to ease my hunger and played it on my computer. After I finished eating it vanished from my head and I crawled back in the sack. I still didn’t fall asleep easily. I dreaded the grapefruit sunrise and the falling watery darkness and the growing clamor of forest birds’ waking songs. But soon I drifted back asleep. Here in the solitude of the Himalayas, I can’t escape it– the American West permeates every layer of my consciousness. Guess it goes to show that you can take the cowboy out of the country, but you can’t take the country out of the cowboy.