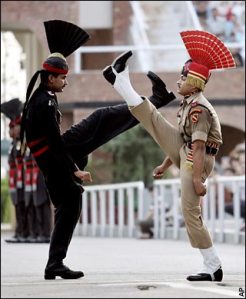 The Israeli girl who went to the border crossing with us the other day, who sat in the front seat while we sat crammed four to the middle row and six Indians in the back, she was also on my bus to Dharmshala. She has young eyes, symmetrical dark features, a prominent nose that looks fine in profile, with hairless thin and long nostrils, and a wrinkleless mien. She wore a loose white shirt and jeans and although her pale lips were slightly chapped, her hair was down and as she walked past me I was looking forward to smelling her.

Not necessarily because she is attractive, but because I enjoy smelling people. We don’t have any good words for smell any more. In Shakespeare’s day “reek” had positive connotations. Today, they’re all bad. So just by smelling someone I become a weirdo, as if it were worse than looking at someone, or listening to them speak. Some people just look like they have a nice, or even an interesting, smell, whether because of how they are dressed, their hair, their size, or their facial symmetry, how good looking they are. Sometimes I smell people not wanting to, and this can be good or bad.

Once I was walking in Philadelphia with my friend Al and a big black lady walked past us. I don’t really remember what she looked like, so all these details could be wrong, but in my mind she wore baggy black pants with little orange-gold crosses on them, a loose green blouse to keep her cool in the humid East Coast weather and to make her look less big, and she wore dreadlocks sprinkled with a touch of grey tied above her head. She was wearing sunglasses too, maybe, and red lipstick. And when she walked past me, I smelled purple. Synesthesia, maybe, but she smelled sweet and fruity, like grapes that ripen on the Indian Ocean in October. She exuded this perfume so confidently that when she passed, I turned to Al and said, “Do you ever smell people?” I said it with the air of a connoisseur, the way you would comment on a sunset.
Al looked at me askance. “Not if I don’t have to.”

“Really? You never walk past someone and smell them and they smell really good? Or not even so good as unique, or human, like you’d never smelled that smell before?”

“Not really. I generally try to avoid smelling other people, and make sure I don’t smell myself.”

“Hmm. I like smelling them. Sometimes it can be refreshing. Not smelling their b.o., but their laundry detergent or their hair, especially if it’s a beautiful woman. And even then, smelling her b.o. can be nice.” I was in Prague once dancing with a blue haired girl and over the music and the dozens of others dancing around us in the dim bar lighting she said that b.o. is like overripe fruit; sometimes I just want to lick it. I took that as her complimenting my b.o. because we had been dancing really hard, and at that time in my life, whenever I danced like that, which was about as often as I could, I made the back of my t-shirt entirely wet. When she said that, I became very attracted to her. But nothing ever happened between us, and afterwards we were never close.

So when the Israeli girl walked past me, I inhaled deeply and was pleased to smell fresh laundry and her natural odor, the smell of a small-breasted woman whose forehead is just beginning to glisten– the kind of smell that lets her lover know she’s been sufficiently worked up.

Smelling someone is an intimacy we take for granted. And when you pay attention to it, it can form a subconscious bond, which may only last a second, or which can grow into something deeper, a yearning perhaps, between two people, irrespective of sex. It must go back to our animal roots, the musk of male deer, for example, and how it marks territory.If there existed a word for female musk I would call it “fisk.”

I hadn’t been as attracted to her when we went to the border because she was sitting next to an older woman who I assumed was her mother, but as I had found out just minutes before she walked past me, was a fellow Israeli named Carmela, after the mountain where Elijah defeated the priests of Baal. They were sitting next to each other and I  was sitting next to a 20 year old with curly hair and muscular arms, who goes to UVA and speaks Hindi after learning it for three months in Rajasthan. All I’ll say about her is that even though she was smart, she was too politically-minded to be a great thinker.

When we got out of the cab, Ram, an Indian guy the Virginian had talked to during the ride, tapped me on the shoulder. We began talking. He led me into the stands, but they were filled: we were pressed to the top, out of eyeshot of the spectacle itself. These were upper deck bleacher seats, and in the distance, I spotted the Israelis and the other girls we had driven with far away on the other side, as close as possible to the gate, snapping photos with their huge cameras. They were surrounded by other white folks, and since the Indian government gives preference to tourists I knew I should be there too. I told Ram to join.

We determined which side was best to push through the crowd. There were hundreds of people standing in the aisles. We walked down, and crossed along one row into a swarm of people who bunched near the entrance with no where else to stand. Pausing because people were getting upset that we were pushing through, we waited, hopped a fence and made it to the bottom. We told the officials that I was a foreigner and they told us to go all the way around. I was a VIP heading to the front row. Ram was my friend, my guide, and so they let him sit close to the front, but they stopped him when he tried to walk up the steps with me. I sat next to the Virginian with the Israelis behind me.

There were perhaps 6,000 people on the Indian side and 1,000 on the Pakistani side. Later Ram said that half the people who lived in Pakistan used to live in India, and vice versa, which made it odd that there was such ceremonial hatred between the two. But then again any hate contains a little bit of love. The Indians wore khaki and red-plumed hats; the Pakistanis wore black on black. Soon the Indians started yelling, led by a tall man in a white sweatsuit, as though it were a pep rally, with him calling, “Hindustan!” the Hindi name for India, and the crowd responding something I couldn’t understand, but tried to repeat anyway. Two ladies led the march. They walked quickly down the road to the cheers of the crowd, to the gate, heels clapping, arms swinging. At the gate they saluted each other, kicked high above their heads and with another resplendent salute, amid the cheers of thousands, waited for the men.

The men marched out in a group of four, their motions synchronized, one falling behind and scampering to keep up, stopping midway to the gate, facing me, and stomped angrily. The Pakistanis mirrored their movements on the other side of the gate, although it was difficult to see. Their crowd was divided between white-robed men and brightly colored burqa-wearing women. I saw two Westerners sitting in their VIP section, snapping photos. Europeans, most likely.

The men continued their dance to the gate, marching back and forth in front of it like angry birds, the Pakistani guards doing the same. They opened the gate with a clang. The crowd’s cheers reached a pitch when the Indian men got face to face with their opposition, close enough to smell each others’ musk. Their faces were taut with aggression. Just to the left of the gate, beneath me, an Indian stood on a small lawn holding a rifle. Across from him a Pakistani did the same. It was as though if the crowds weren’t there, one wrong move could mean war. A selected soldier walked to an official with a spear, whose turban had red tassels. He saluted and returned to the gate to face the Pakistani on the other side. In sync, with rapid jerked movements they tied a rope around their respective flagpoles and slowly, with more aggression and displays of stomping, saluting, kicking and hat touching (because how embarrassing would it be for them and their country if their hat fell off in the middle of the ceremony?), they angled the ropes at thirty degrees and began to lower them. I wondered about the significance of whose flag reached bottom first. The Indians’ did and the Pakistanis seemed in no rush to catch up. Once the flags were lowered, the ceremony was finished and we flooded the road like fans on the field after the World Series.

The whole ceremony had an air of patriotic camaraderie and a hint of absurdity, as though the aggressive displays were for show; nothing bad could happen; everything was under complete control. When I asked Carmela and the young sweet-smelling girl what they had thought of it, Carmela said, “It was childish. Like their religion, like their marriages; Indians are very childish.” She made this pronouncement with great authority, and I nodded, considering. It had seemed rather silly, all that stomping and saluting. But why else would we want to see it?