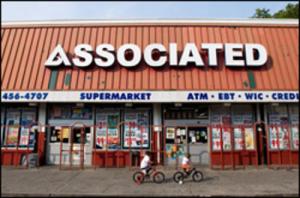 There is a small woman who bags the groceries at the Associated. She said “Hi” to me today. We usually speak in Spanish and she laughs at me along with the cashier. But today I was returning a light bulb and I was too preoccupied to talk to her in Spanish and so I only said “Hi, how are you?” The cashier said “Good” and the small woman nodded too.

She is maybe five feet tall and wears her chestnut brown hair pulled back to the nape of her neck in a small bun. She has almond shaped brown eyes. The hair that is tied from her face is grey. She wears her red Associated smock and a sweater or a hoodie underneath. She has gold lining her canines, which she shows often. Today as I was leaving she was counting her tips.

She lives about a twenty minute walk deeper into Bushwick, where there are fewer white people and the corner stores sell turkey neck and goat. She is a grandmother to twelve. She lives with her husband, who works construction but is not part of a union. She came here from Mexico in 1992, when she was twenty-nine. Her daughter and her family live nearby and on Sundays when she gets off work at six, she goes to play with her grandchildren.