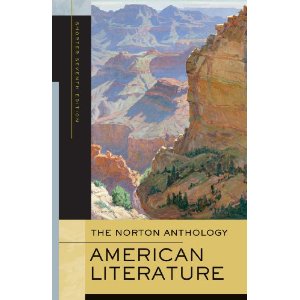 Henry Miller may not be the best writer, but he was a great liver. Tropic of Cancer is so live, and although his prose isn’t as balanced and powerful as, say, Henry James’, he has a great vocabulary. I wonder if his writing will ever be included in a Norton.

I found the third edition of the American Anthology of Literature in Chris’ hallway in the McKibben lofts. Kerouac isn’t in it, but he ‘s in the new one. Joyce Carol Oates was removed. Raymond Carver was added. David Foster Wallace will probably make it into next decade’s. Most good novelists usually have a short story that’s easily anthologized.

I’m reading The Jungle, by Sinclair. It’s good but it’s depressing and he isn’t as poetic as I’d like him to be. He waxes poetic when talking about the human aspect of the Lithuanian family — the first chapter about their wedding is superb. But the journalistic muckraking is often tedious, too judgmental, and frankly, quite gross.

The canon. Composite of classic literature. Always shifting and being redefined. But then there are some mainstays. These writers have the passion for life and the passion for writing, together, balanced. When the scales tip too heavily to one side, the critics look elsewhere.