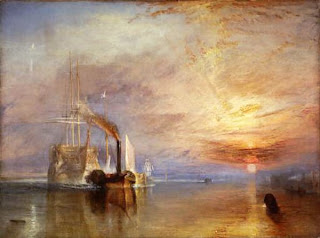 The Tate Britain is often overshadowed by its younger brother the Tate Modern, but JMW Turner, arguably the best British painter of the 19th century bequeathed his entire collection to this neoclassical building, which gives the Modern a run for its money.

Turner was a true Romantic. He wrote verses to accompany his paintings, didn’t care  much for public opinion and ultimately prefigured modern painting with his impressionistic style. Monet was an ardent admirer, and even Cezanne’s achievement of textural depth likely found its roots in the work of JMW.

I would say that if we’re talking about avant-garde artists of the 19th century, Turner would have to be in the top five.

Then we biked home to our blue-doored hostel beside the British Museum to freshen up. And walked down High Holborn St. and asked where we could find good Indian. And it was.

We bought Indian beer and drank it as we walked and discovered the neoclassical Somerset house that used to house all the births and deaths and now looks good and is home to the galleries that I will blog about tomorrow.

The Spaniards at Walkabout were plenty and we danced and drank and smoked and took the tube back. I told a young man from Birmingham that I’m a writer and he said ‘fair fucks’ which means ‘well played.’